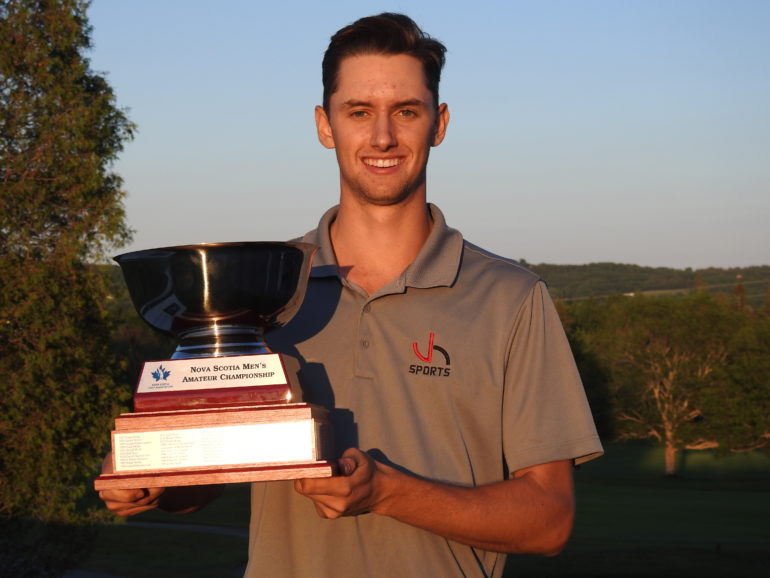 Ross completes the wire-to-wire to win the 2019 MCT Men’s Amateur
Calvin Ross from the Kingswood Golf Club in Fredericton completed his wire-to-wire win at the 2019 MCT Men’s Amateur Championship held at the Abercrombie Golf Club. Ross, a member of the Texas State University Golf Team, fired a final round 76 to finish the 54-hole competition with a three day total of 213 (E).

“Today there was a little more pressure and I felt it on the front nine. I got suited coming down the back. I was able to get it done and I finished pretty strong.” said Ross following his round. “The course is in unbelievable shape. I know a-lot of guys from Nova Scotia that I grew up competing against. It was great to be here and compete against them in their home province.”

Ross is heading back to New Brunswick to compete in the Golf NB Men’s Amateur next week.

Two time NSGA Amateur Champion, Dave Williamson of the Ashburn Golf Club finished second overall and six strokes behind Ross. “In a weird twist of fate, I lost to a young man from New Brunswick. Over a decade ago (2008) I won my first men’s championship at Lingan and then traveled to New Brunswick where I won the Golf NB Amateur in the same year. I hope Calvin can do the same when he returns home next week.” said Williamson after the round.

Representing Team Nova Scotia at the upcoming Canadian Men’s Amateur Championship is Dave Williamson, Brett McKinnon and Kevin George. The three-man team will compete as part of the Willingdon Cup Interprovincial Competition at the Canadian Amateur next month in Halifax at the Glen Arbour Golf Club and Links of Brunello in Halifax on August 5-8.

Below are the competitors who have qualified for the 2019 Canadian Men’s Amateur Championship.